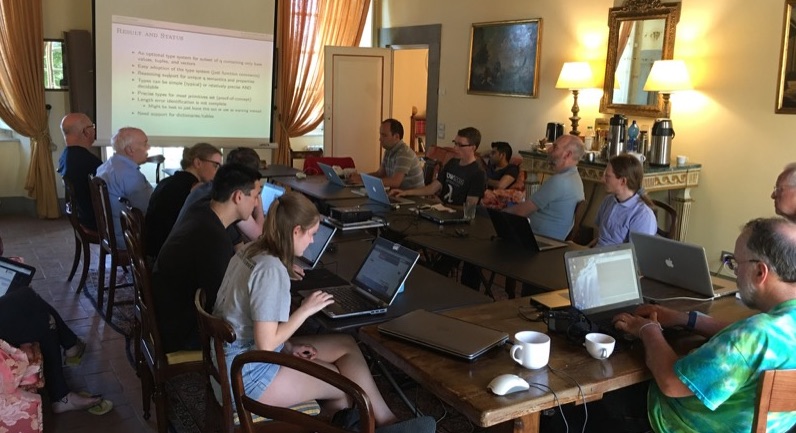 Everything I could have hoped for. Part hackathon, part think tank, part professional conference (in all the best ways), I was able to meet with a group of people simultaneously like-minded and of diverse and interesting background experiences. It was great to meet people with far more experience in the field than I have, and even better to be in a setting intimate enough for them to sit down and share their thoughts and wisdom in ways that were deep and meaningful. When discussing ideas, I found that the questions were insightful, the discussion productive, and the subsequent coding worth the trip all on its own.

What I got from this event, even more so than the last one or two “official’ ICs, is the chance to discuss implementation details with the other language imps. There are lots of things that are done subtly differently in APL/J/k/etc, and often no-one realises that they can be done differently until we get together in the same room and start sharing our experiences.

As usual I found it inspiring to have some bright users present, as well as just implementors.

The big thing I got from the week was the “networking”. I put that in quotes since it is far from typical networking, and doesn’t at all compare to a typical conference experience. By the end of the week, all of these people are friends, which is a much stronger network than the superficial experience often obtained at larger conferences.

Being a q/k guy, I’m immersed in what is happening “currently” in that space, but only aware of a “static” image of APL and J. Iverson College provided an environment where I’m exposed to what is “current” in other array languages as well, and the historic and current design decisions and open questions behind each language.

I learned a great deal from the q/k ‘gods’ over the week. Collaborating and talking with Pierre and Oleg was especially insightful. Being a language-design/popl hobbyist, discussing language design and implementation ideas with these two was very interesting. Being a visualization enthusiast and implementor, talking to Devon to see what is currently being done in J in visualization and graphics was quite interesting as well comparing to what I have and am doing in the q space.

Needless to say, I’ve come back with a long list of references to papers and code to study. I’ve applied for a Dyalog personal license!

I got more out of this week than I imagined. For me, being new to Kx and array programming in general, it was inspiring to see not only what's going on within the k/q world, but also meet people who use other languages. It’s caused me to be energized about improving my own code/projects.

Iverson College is the perfect space to meet others and see what other projects are out there. Not only that, you have the ability to present your own work and get feedback from your peers, which is invaluable in itself. Secondly, at least at this point in time, there is no other way to meet others in the community. It was a great opportunity for me to expand my professional network, especially since I'm in New York and not around the core Kx team. I definitely plan on getting more involved in the array-programming community after this.

I thoroughly enjoyed this year’s college. It is said that people make the place, and accordingly this was lovely. It was a privilege to be immersed into such an environment, witness to the intellect and enthusiasm which APL-style languages seem to encourage. We were spoilt with the outstanding meals which were well beyond anyone's expectations. Carting tables, chairs and cutlery around at mealtimes turned into a team-building exercise for which we should have volunteered earlier! I thoroughly enjoyed the opportunities to talk with most of you, and I learnt something from or about everyone. It was great to see old friends again, and to meet new ones. I left feeling like I understand the world better.

I really enjoyed the demonstrations people gave. It was great to get an insight into the direction and the longer-term development plans people there had.

I liked getting to see APL as another Iversonian array language and to see the similarities and differences.

The venue was amazing and I loved the juxtaposition of us modern-day programmers working in this Tudor hall!

The participants were clearly of the highest caliber, so for me to get to meet all these people who contributed so much to the language and its development was an honour really. 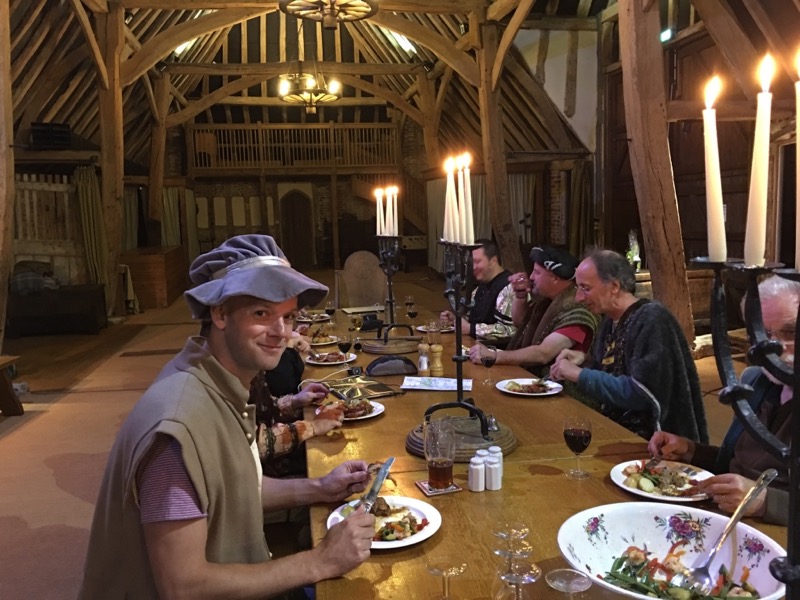 A privilege to be with such creative minds.

Wasn’t it fun? Aren’t we a great bunch of people?

I’m only starting out in the world of q but it was such a privilege to meet you all. I have been inspired to think of my code as a work of art and will try to keep this in mind no matter how quick the presales environment might be.

I really enjoy the high-value conversations I can have at these events. They go so far above and beyond what is possible at another venue. I like the opportunity to put the world to rights, with people for whom programming is a genuine passion.

And yet I’d like to see some structured discussion — doing the EIN13 challenge isn’t as much fun as talking about different strategies for doing it, making it smaller, or making it faster. I think this would transfer well for the more junior participants, who look at conference as a way to develop their skills and increase their confidence. That is to say, seeing our solutions isn’t as useful for that as seeing how we fail.

Oh man that cooking – best ever.

Everybody, it was a pleasure to be able to spend time with you and to listen to what you’re up to.

One of the best jobs I have worked as a chef so far.